If you run the script again while it is running, a prompt will be presented to terminate the script.
You should click to remember the setting and click Terminate to close it.

The new 2.0 version has changed the way you add and remove tracks. In version 1.x it inserted dpMeter in the track you select.. This had a problem that the fader trim gain or automation volume was not considered because they are after dpMeter in the signal flow. This has been solved by creating a post-fader send to a new track and insert dpMeter in this new track, which are grouped in a folder called "Loudness Graph folder". It's hidden by default because you don't really need to see these tracks. They are only for the analysis. There is a track named "-- LG last in folder". Do not remove this track or rename it. It is needed so the script finds it and adds new tracks inside this folder just above this last track in the folder.

In 2.0 version the order of the tracks is manual, giving the possibility to manual custom order in the meters. If you need to change the order in which the tracks appear in the meters area, you only need to rearrange these hidden tracks and click refresh button. You can see these hidden tracks in REAPER track manager window. You can even reorder them from this window. No need to unhide them.

There has been a major change too to the file format used to save the loudness graph data. So the previous .loudness files are incompatible with this version and a new format .loudnessgraph is used to avoid confusion.

All other new features in v2.0 are marked in red in this page. 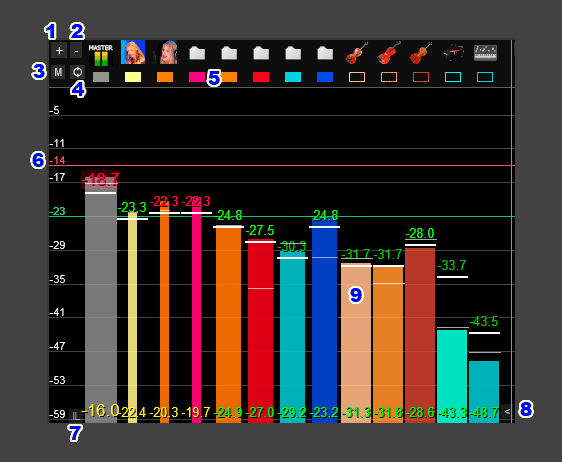 ( 1 ) Adding tracks: Select one or multiple tracks and click the "+" (plus) Button on the left. This creates a post-fader send to a hidden bus track where dpMeter plugin is inserted for analysis. All hidden bus tracks are inside a folder named "Loudness Graph folder". You can see them in REAPER's track manager. When you exit the script, the dpMeters instances remain in the project, but bypassed. When you start the script again it will unbypass all the instances again.

( 2 ) Removing Tracks: There are two methods:

( 3 ) M Button: This quickly adds or removes the MASTER track.

( 4 ) Reordering tracks: In REAPER's track manger, you can see the hidden bus tracks in the "Loudness Graph folder". You can reorder them (drag and drop in the list ) Thenn click on the  Ѻ button to refresh the tracks in HeDa Loudness Graph.

The graph display is a representation of the meters in time and it is linked to REAPER timeline. 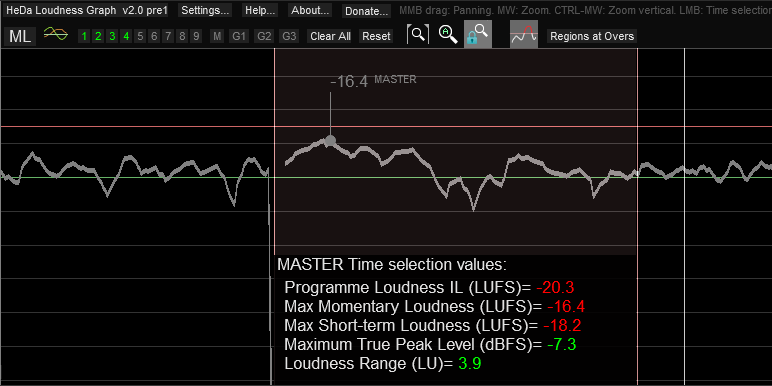 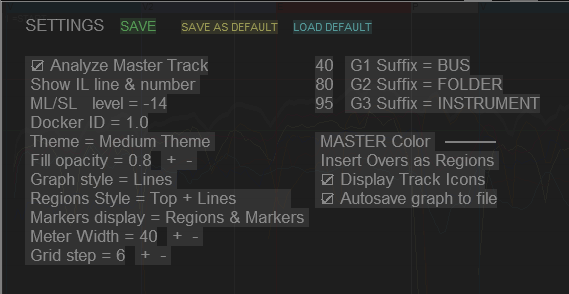